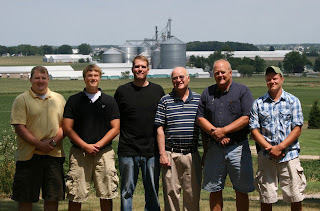 Our new website home page photo was just recently taken to show the third generation that is getting involved more and more at Sunrise Acres. Marvin and June founded the egg farm in 1949 and Marvin’s father Cornelius Patmos was a farmer before him in and around Hudsonville, MI. That makes us proud third and fourth generation Michigan farmers.

Sunrise Acres is an Egg Farm located in Hudsonville Michigan. Sunrise Acres was started by Marvin and June Patmos with 100 chickens in 1949. His two sons, Dick and Bill Patmos took over day to day operations in the 1980’s. Today the third generation, Bill’s sons and Dick’s sons-in-law, are learning the family farm business.

Eggs are an important source of complete protein for vegetarians. One egg = 1 ounce of lean meat, fish or poultry.